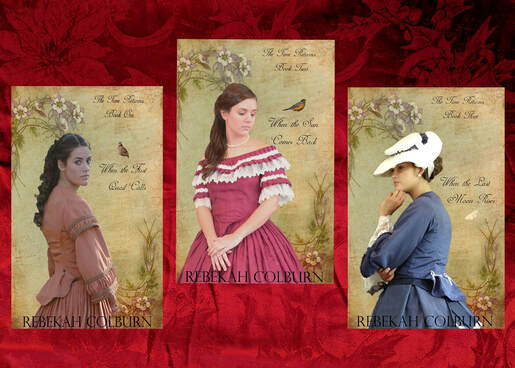 The past and the present interweave in this series, moving forward through one storyline, while marching backward through time in another as Natalie explores history to better understand the foundations which were laid by previous generations.

A story of forbidden love, family secrets, and reconciliation.

Book 1: When the First Quail Calls

Charity Winslow was a young bride when the Civil War began. She poured out her heart—and her secrets—in her diary, never imagining that over a hundred years later her great-great-granddaughter would discover it hidden in the attic in a forgotten trunk. What Natalie discovers within its pages will shake the foundation of her entire family, and will have more personal implications than she ever imagined.

The year is 1967 and the Vietnam War is raging. The world is changing in many ways, but in a small town on the Eastern Shore of Maryland, things move at a different pace. Can Natalie find a way to bring reconciliation and healing to a place that still clings to the traditions of its deeply entrenched Southern roots?

Book 2: When the Sun Comes Back

Natalie and Tony’s story continues as they begin their married life together and upset the social order of things on the Eastern Shore of Maryland in the late 1960s. A white woman and a black man whose family connections go back generations, they are determined to persevere in the face of disapproval and prejudice to be a force of change, bringing the community together in racial unity.
​
Five generations earlier, Eliza Winslow was the mistress of Dogwood Hall and the wife of a slaveholder in a time when women held few rights and no power. No one knows exactly what happened the night her husband was murdered, only that he was found dead and two of their slaves were never seen again.
The past and present interweave in this fascinating tale of two women living in the same place a hundred and twenty years apart, facing challenges that were vastly different, yet rooted in the same questions of human equality.

Raising mixed children in a rural community in the 1970s brings new challenges to Natalie and Tony’s relationship. The first white woman to marry a black man in their small town on the Eastern Shore of Maryland, they are up against generations of ingrained beliefs on the separation of the races. In fact, the KKK is still alive and making its presence known.

Natalie’s study of local history reveals just how sordid and complicated the legacy of slavery is in her own backyard. In the 1800’s, on the border between Maryland and Delaware, there arose a gang who captured free blacks and fugitive slaves and sold them into the deep South. Her fifth great-grandfather had established Dogwood Hall during this same era. As she delves deeper into genealogical research, she enters into a new maze of speculation about her ancestors’ lives.
Once again, the past and the present intersect in the stories of Adelaide and Natalie Winslow, two women separated by time, though bound by blood and their shared belief in the equality of all mankind.
​